DEATH – the mere thought of the word brings chills to the bones. Movies and novels have revolved around this theme, touching the very core of our humanity. Unlike topics like sports, politics, and cuisine, this word is often taboo. Humans have found ways to lighten its sting by calling it “loss” or “passing away.” What is it about death that’s so unique?

But death is a natural reality in life. It is as normal an event as birth, graduation, or marriage. All of us will have to face it one day. But people try to shrug off any thought of it, and numb their minds of this inevitable reality by keeping themselves busy with all that can be enjoyed here on earth. Life is short.  As depicted on a person’s tomb stone, what is life on this planet but a mere dash between two dates? And after a funeral, people will soon hardly remember the person who just died.

Our heart beat is a ticking timer – rapidly counting down to zero when it rings “Time’s up”. As in an exam, the proctor would announce “finished or not finished, pass your papers forward”. Most of us have no idea know how much we have left on our timers. Some are less fortune, or would it rather be fortunate, to know it. They, on the other hand, turn out to be much wiser than the rest – living life with a deeper appreciation of the time-tested metaphor “Time is gold”.

As a father who had experienced how it is to lose an only child can appreciate how precious the little time he had spent with the child was, so it is with how we should view life. We can only really appreciate life in the light of death. No one on his death bed will be thinking: “I wish I had attended more board meetings, amassed more wealth, or played more golf”. The things so many people keep busy with and run after all their lives turn out to not actually matter much when they are faced with their final days of life on earth.

Thinking of death helps bring into proper perspective the things that truly matter in life: time communing with our Creator, time with family and friends, spreading peace and joy, caring for others, and the like. It changes our core values, how we spend our precious time on this planet, and our appreciation of opportunities.

Below are some meaningful questions to reflect on in light of death:

Almost daily, we are bombarded with news of the death of some people across the globe. Recently, the image of a hooded man in black drawing a knife to behead some unfortunate soul kneeling on the ground in an orange outfit resonates with a thousand words. What would you be thinking if you were in the shoes of one about to face the ordeal? 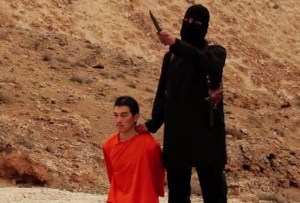 Imagine: What could have went through Bin Laden’s mind just before he died? (The answer is at the bottom of this article) On the other hand, Kenji Goto who was the Japanese that got executed by ISIS recently was a Christian. My best guess as to what went through his mind during his execution was: “Father, forgive them for they know not what they do.”

By far, the only power on earth that could overcome all the killing and atrocities that have swallowed up so many lives is this: the MIND of CHRIST. At Zaxxun, we believe it’s all in the mind. If fear is just a state of mind, then its antidote is also all in the mind. The reason the apostles and early martyrs for Christ were able to drink the cup of terrible persecution was because of this differentiating factor. And the mind of Christ is propelled by love and the knowledge of truth.

How can anyone face death with the calm of a naive innocent lamb? The secret resides in knowing what lies beyond the grave. A person about to receive the slit on his throat by the hand of the ISIS terrorist would simply think “I’m not afraid of what you’re holding. That’s just the key to unlocking this temporal earthly gateway to heaven.”

One bold preacher of the gospel to Africa shared about how he once faced death threats from some locals if he ever proceeded with his planned crusade. His answer was: “They can’t threaten me with heaven”. The fear of death fades away when we know the truth about the world beyond the grave. Only the mind of Christ can give a person such peace and assurance even when facing this gruesome enemy called death.

There was a theme park that offered unique rides. The rides allowed the visitor to taste different ways to die. The operator guaranteed that after each ride, the person would get his entire body intact once again. However, no one voluntarily entered the theme park. Despite the massive marketing effort and assurance that all will be restored, there were no takers.

For hundreds of years, no one dared to venture in. But then one brave soul emerged and took up the challenge. Again and again, he tried one ride after the other. Then he came out of the theme park at the end of the day. People were mesmerized as he walked out with his entire body intact.

Then the guy opened his mouth to the crowd of onlookers saying “Do you want to know my secret?”

The MIND of CHRIST

At Zaxxun, we postulate that everyone has the mind of Christ. It just happens that it is dormant in some, but awakened in others. People need a greater revelation – a realization, an opening of their eyes to what they already have.

If you wish to have the scales fall of your eyes, please read our articled on The Empty Glass.

How much are you?

So many have died by the hand of a fellow human being, be it through crime, acts of terror, ethnic cleansing, or war. How is it that a man can just easily take the life of another – and still casually eat his supper in the evening? How is it that a robber can stab and murder a stranger just for a cell phone or a few dollars in the victim’s pocket?

Zaxxuns believe that ultimately only the Maker of souls has the prerogative to cut off the lives of his creatures, and the only time men are allowed to execute such is when it is clearly sanctioned by God. For example, God allowed King Nebuchadnezzer of Babylon to put Jerusalem under the sword, to punish relentlessly idolatrous and rebellious Israel. The king was the hand of the Almighty to put into effect his sovereign will for an unrepentant nation. Other than such a purpose, killing is murder: outlawed by the 10 commandments.

So how much is a life? What is the value that can be put on a human soul? To try to come up with a comparable estimate, try answering this simple question: If Bill Gates of Microsoft offered his entire fortune of 40 billion dollars in exchange for both of your eyes, would you sell them? Most likely you’d say “no, not even for a trillion”. If that is how much we value just a part of our body, how much more is the value of our entire body? And yet, a murderer can just spill “more than a trillion dollars” just like that.

But the greater question is “how much is the value of your soul?” Not even all the riches of this world can equal the worth of a single soul. If you lose it to an eternity in outer darkness and suffer torment forever in hell, what would you pay to get the chance to go back to earth and repent?  Remember Lazarus and the Rich Man.

Think about it. This could be your last chance. What guarantee do you have that you’ll still be breathing next morning? I’m quite sure Bin Laden didn’t see it coming…