Let’s attempt to quantify the glory of this infinite being we call GOD in terms of the amount of energy at play in the cosmos:

There are about 10 billion galaxies in the observable universe, with say 100 billion stars per galaxy; one of these nuclear fusion reactors suspended in “empty space” is our sun, which beams energy in every direction. At a radius of about 90 million miles, some of that energy finally reaches Earth and that radiant heat is enough to sustain life on the entire planet. 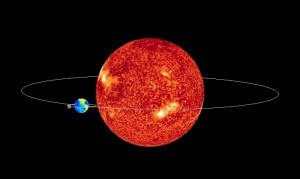 Now just how much of the sun’s energy reaches Earth? A measly 0.000 000 000 1% according to Quora. Then wind back and try to imagine how many “Earths” the entire collection of stars in the universe can sustain…. yes, it’s just so jaw dropping we wouldn’t even attempt to provide a number in response to the question.

God’s glory (magnitude, power, might) is simply light-years beyond our human imagination; yet some self-important people would have the audacity to say “God, let me help you out”.

We really ought to start putting things in proper perspective: the nations are but a drop in the bucket/ocean for the Infinite Mind who fine-tuned the physical constants (G,h,c,…) and programmed/coded the DNA to bring forth intelligent lifeforms.

It’s time “ants” and “germs” like us began reflecting deeper on our “significance”, or rather insignificance, in the grand scheme of things. Isaiah 55/9 sums it up beautifully…

Why can’t God just show Himself in the sky in all His glory?

Why can’t God just end all this debate about His existence by appearing in the sky for all to see; then all the atheists and agnostics will bow to their knees in humble awe and adoration.

One possible reason is that humans will still fail to see Him. Just imagine looking straight into the sun for 1 minute at high noon. Considering the amount of lumens the human eye can “legally” absorb without breaking down, we will practically go blind gazing at this glorious object we call the sun that already stands 90 million miles away from us. And at that vantage point, we’re not even looking at 1% of 1% of its relatively puny glory.

How much more to ask an INFINITE BEING to show Himself to us? Can your frail body and eyes withstand the energy and blinding glory of a trillion billion suns? God knows better than to reveal Himself to mortals in His actual form. That’s why He had to dim the light and tone His glory down before setting foot on earth to communicate to humans directly.

“you cannot see my face, for no one may see me and live.”

It was for his own good.

How then can mortal man see God? Well, God did not create man and just left them to themselves. God gifted man with the basic reasoning ability to find his way to the realization of the existence of his Creator.

For one, we can see the fingerprints of God everywhere we go. The more man was able to create tools and telescopes to pore into God’s secrets – like the galaxies above and the DNA/subatomic particles, the more his discoveries have led him to know without a doubt that God exists.

Because we cannot see God directly in a physical sense (or else we’d melt and vaporize), we can see this immense immortal infinite Being through eyes of faith – not a blind faith that believes because a man in a religious robe says so, but a faith that is backed by reason, common sense, and scientific-observation-based evidence.

For since the creation of the world God’s invisible qualities, His eternal power and divine nature, have been clearly seen, being understood from His workmanship, so that men are without excuse.

If you are alive today and fail to see that God does exist, it’s really your fault. God is a rewarder of those who diligently seek Him; and His reward is knowing who He truly is – that’s the definition of eternal life (John 17/3).

If you still need help convincing yourself of the truth, try watching the video at this link: